This game was made for the 2019 Timtam Slam Jam by Team Oreo.

Once upon a time, there was a kingdom ruled by a king and queen.
They had two children: one destined to inherit the throne, and the other destined to become a hero.

This three part story chronicles the story of that hero...

Chapter one - The dragon master has stolen the tablet of power! As the hero, you must get it back!

Chapter two - The kingdom has torn in two. Can you prove yourself as a hero and bring it back together?

Chapter three - It has been many years since the events of chapter two.
What will you do now? Are you even the hero you thought you were?

This game has two main avenues of gameplay: the overworld platforming sections and the battle sections. 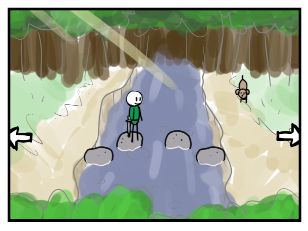 Very early on, the hero will obtain boots that will allow them to jump across small gaps. There is no penalty aside from positional setback for falling, so don't give up! 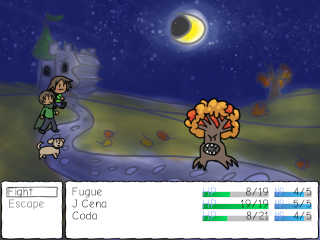 The battle sections are all unique encounters with immediate relevance to the story at hand. The battle system is fairly standard, but with much smaller numbers than usual. Items cannot be bought so use what you can find wisely!


The noble child on a journey towards adulthood. With their trusty blade, they can conquer any obstacle!

The heir to the throne and the coolest brother you could ever ask for. Unfortunately, his princely duties cause him to be absent more than you'd want...

The hero's faithful companion. What would you do without this fine canine?


A magician with a strong moral compass. What they lack in strength, they more than make up for in magical power.